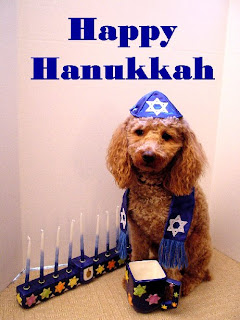 Religious traditions are rarely intelligible. Trying to interpret a manger, a tree, and an overpriced sweater from The Gap is just as difficult as deciphering a spinning top, an eight-armed lamp, potato pancakes, jelly doughnuts, and an overpriced sweater from Old Navy. When I was growing up, though, my parents synthesized all of Hanukkah's symbols and rituals into a rational whole.

I understood Hanukkah when I was seven (at that age, Hanukkah and Reebok Pumps were the only things I accepted without protest), one of the major reasons I still appreciate it now. The other reason is that, like Christmas, Hanukkah is a pleasantly casual holiday, light on responsibility and heavy on good cheer. There are no Sabbath-like restrictions. All you have to do is exchange gifts (nice), eat unhealthy food (nice), and light fires while you’re singing songs (very nice). It’s uncomplicated and juvenile, with very little time commitment. And, because the holiday is diffused over eight days, even the most over-bearing family won't make you come home for the whole thing. The folks only demand a night or two, and you walk away a few presents richer.

What’s not to love?

Hanukkah also shields us Jews from Christmas jealousy. Judaism has fast days and days of mourning, and has a total of eight weeks during the year wherein you aren’t supposed to listen to music or see movies. Included in those eight weeks are nine days (called "The Nine Days") that prohibit the following: music, movies, alcohol, meat, swimming, parties, sporting events, and doing laundry. But it’s not just Judaism—all types of monotheism can be a drag. Muslims don’t eat for a month; Christians have to put ash on their foreheads and tell some guy sitting in a latticed booth how much they masturbate. Although I always thought of myself as an “oppressed Jew,” I wasn’t jealous of the non-Jews; in some ways, their plight seemed more abject than mine.

But Christmas is enviable. A tree, some presents, multiple nights, caroling, a nice dinner, “Home Alone”—I could get into all that. The one time that a rival religion might woo me for a few days, however, coincides with Hanukkah, of equal (or more) grandeur. It's also got the presents, the multiple nights, the singing, dinners, and family time. And while we might not have an answer for “Home Alone,” history has made it clear that Macaulay Culkin is not worth pining over.

Silent Night or The Hanukkah Song? The choice is clear.