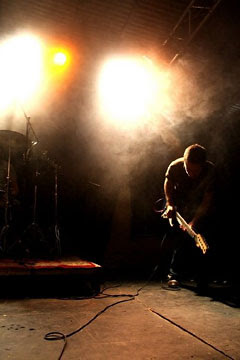 “Michael Jackson takes himself so seriously,” said Jonathan Dagan, leafing through a salad in a Mexican restaurant on Manhattan's Upper West Side. Over dinner, the Haifa-born producer and frontman for J.Viewz, an electronica and trip-hop project from Tel Aviv, was explaining the inspiration behind his cover of “Smooth Criminal,” a down-tempo lounge treatment of the Jackson classic.

“Our version is a parody of that seriousness. It’s honest,” said Dagan, energetic and talkative in a sweatshirt and jeans. “It shines a new light on Michael Jackson.” Although it may sound paradoxical, Dagan’s description is right on: the song is an honest parody. In replacing Jackson’s frenetic elements with a slower tempo and sweet, loping vocals, the song is both irreverent and straightforward, a minimalist send-up with an aesthetic that characterizes most of the J.Viewz catalogue: smart, edgy, and altogether engaging.

J.Viewz, founded by Dagan in 2002 while he was in the band Violet Vision, functions mainly as Dagan’s one-man studio creation. He recruits a full band—guitars, vocals, trumpets, an MC, and even a laptop—for live performances, which include Dagan’s own work on the turntables, guitar, and computer.

Dagan lifts a heavy studio load in between tours. The Besides EP, J.Viewz’s most recent release, proved a stripped-down follow-up to its 2005 debut, Muse Breaks. Besides (so named because it consists entirely of b-sides and other one-offs) leads in with “Smooth Criminal” and includes other remixes, live tracks, and singles.

The music suits its creator. Dagan is like a human remix, an amalgam of styles and source materials wrought into a clever, easygoing whole. He is humbly cosmopolitan, as eager to admit what he doesn’t know as he is to offer information. His J.Viewz material is similarly balanced, with a mood that remains simultaneously relaxed, danceable, and uplifting.

The variety of cultures and genres reflected in the music is a testament to what Dagan described as his lifelong struggle with Israel’s artistic shortcomings; he had to work to cultivate his tastes.

“I think that Israel has a lot to do with how my music sounds today, even if it’s the lack of cultural profundity I found in my hometown which had me searching for interesting music underground,” said Dagan. “I’m pretty sure I wouldn’t have found [the same inspiration] if I’d lived in a place that satisfied my artistic needs.”

Having found more fertile musical ground in the States, Dagan—who said he developed his unhesitating English by watching TV as a kid—is thinking of permanently relocating to New York. Despite having produced ’s number-one Israeli radio hit “Adam Tsover Zichronot” this year and despite J.Viewz’s burgeoning success at home, Dagan took a rental in Manhattan this month and is exploring the Big Apple’s musical prospects.

“Something in New York City just feels right,” said Dagan, who will soon celebrate his twenty-seventh birthday. “Today we had rehearsal in Brooklyn, and we saw break dancers in the subway station, people just doing their art. I love that here…I have a hunch I’ll stay.” Still, there are things he’ll miss about his home country.

“I’ve been going in the streets and whispering to myself, ‘ch ch ch,’” said Dagan, mimicking the guttural friction the letters “ch” produce in Hebrew. “I haven’t used it for a while.”
Posted by DJ Blogger at 3:31 PM